The South American Church with Stories Underneath its Floors

Cathedrals and Catacombs of Lima, Peru

At the Cathedral of Lima in Peru’s capital city, you can see much more than the elaborate chapels, impressive architecture and religious statues. Underneath the stone floor lies a maze of catacombs, containing stories within the crypts and tombs that reside inside its walls.

I’ve just arrived in Lima, Peru early yesterday morning for the start of a five-week South American trip through Peru and Argentina. After freshening up from my overnight flight and grabbing some breakfast, I headed to Plaza Mayor (the main square) of the city.

This is where history abounds: beautiful deep yellow buildings with dark enclosed balconies dripping off their sides line the large, open plaza. A fountain in the middle draws birds and children. At one end of the plaza sits the Presidential Palace, and adjacent to it along one side is the main Basilica Catedral de Lima. Construction of the Roman Catholic cathedral began in 1535, and it opened in 1649. The Gothic/Neoclassical architecture of the building is soaring and elaborate — but in this church, it is what lies below that is most fascinating of all.

Upon walking into the cathedral, you are greeted by the vaulted criss-cross ceiling and columns which perfectly frame the main nave at the front of the pews. Along each side of the church are 14 smaller chapels displaying more than a dozen altars carved in every imaginable style, each elaborate and depicting religious scenes through sculpture, paintings and intricate carvings.

But beneath the stone floors of all of this is hidden a series of catacombs, containing tombs and crypts with the remains of everyone from the former Archbishops of the church to regular people who once lived in Lima.

The remains of conquistador Francisco Pizarro

Francisco Pizarro’s crypt box in the Cathedral of Lima

And one very famous person was discovered in these crypts: none other than Francisco Pizarro himself, the Spanish conquistador who took it upon himself to conquer Peru and the Inca Empire. Pizarro actually laid the first stone of the cathedral on January 18, 1535, carrying on his shoulders the first log used in its construction.

Six years later, however, Pizarro was dead, killed by his own men. (You can read more about Pizarro’s conquers and death at the end of this story).

Pizarro’s body was moved several times over the following years, from the plaza behind the cathedral to a spot under the altar. In 1891, the body was disinterred and placed in an elaborate glass-sided coffin to celebrate the 350th anniversary of his death. But that wasn’t the end of Pizarro’s story.

In 1977, workers discovered another coffin in a forgotten part of the crypt, that was marked as containing Pizarro’s remains, along with a sealed lead box that purported to contain his head (which had been unceremoniously decapitated from his body by his killers). Controversy flared — whose body, after all, had been presented as his for all these centuries?. But with the magic of modern DNA, in the 1980s, a battery of tests by a forensic scientist concluded that the body previously on display was of an unknown official and that the brutally stabbed and headless body from the crypt was Pizarro’s. The head and body were reunited and transferred to the chapel, and today you can view the entire skeleton of Pizarro, along with the inscribed lead box in which his head was found.

The skeleton of conquistador Francisco Pizarro in the Cathedral of Lima, Peru

The catacombs of the cathedral

This photo shows you how tiny the doorways in the catacombs are.

After walking through the rest of the church and admiring the various chapels, toward the back you will find two separate areas where you can actually walk down into the crypts, many of which were discovered quite by chance.

Or rather, stoop, as access is often through tiny stone doorways barely four feet tall.

It’s an eerie experience, to be certain.

Underneath the chapel of Our Lady of Candelaria is a warren of tombs containing the bodies of 70 ordinary people from the times — men, women and children arranged in five communal tombs, interred on top of each other and covered with lime and earth. Tests reveal that these citizens were of a multi-ethnic population of Creole and mixed races.

Above: Cathedral and Catacombs of Lima Peru

Take the steps beneath the chapel of Our Lady of the Assumption, in the back right corner, and you can walk through spaces that contain nine communal tombs about a meter-and-a-half deep, that held more than 110 individuals. You’ll have to duck through one of the tiny, thick-walled doorways to peer down into the anti-seismic pit at the back of the catacombs.

You can see the steps leading down into the catacombs beneath the chapel of Our Lady of the Assumption.

This tomb still holds the shrouded remains of a man, woman and two children.

In the middle of the cathedral’s rear space you’ll find the nave and an ornate wood choir, produced by Pedro de Noguera in the early 17th century and a masterpiece of rococo sculpture. Underneath this, more steps lead to the tombs of the Archbishops, where the remains of all the previous heads of the Cathedral lie. And literally — one glass box contains all of their skulls, staring back at the visitors who descend into this space not meant for the living.

The skulls of the former Archbishops of the Cathedral of Lima, in their underground crypt.

In the back left corner of the cathedral is a museum not to be missed, with paintings and artifacts depicting the history of the church. For example, in this room you can see what all those skulls looked like when the Archbishops were very much alive.

The hall of Archbishops in the museum of the Cathedral of Lima, Peru.

In 1532, he began his Spanish-backed official mission to conquer Peru and claim it as New Castile. Unsurprisingly, the Inca were disinclined to hand over their lands to the Spanish interlopers. Highly outnumbered and far from reinforcements in Panama, Pizarro resorted to subterfuge to gain the upper hand. He invited the Inca emperor Atahualpa and his army of 80,000 to a meeting in Cajamarca. Since the central square was much too small to host such a large group, only a small entourage accompanied Atahualpa to the square, unarmed as a sign of good faith.

That good faith was famously misplaced, and Pizarro’s men surrounded and killed most of the entourage and took Atahualpa captive. After convincing the emperor to fill a room full of gold and treasures from his Empire as ransom, Pizarro had him garroted.

In the years after his conquest, Pizarro lived high on the hog on his riches and fame in the new town of Lima, which he helped establish. During this time, Pizarro and his brothers began fighting with one of their men over shares of the booty. Eventually the Pizarros had the man killed (garroted, again) and his son stripped of any fortune. Three years later, his supporters had their revenge, attacking the Pizarro household at dinnertime. Pizarro fought back, killing two men and attacking a third, but when his sword became stuck in one man’s chest, he could not defend himself from deadly blows to his neck and head.

If You Go Details 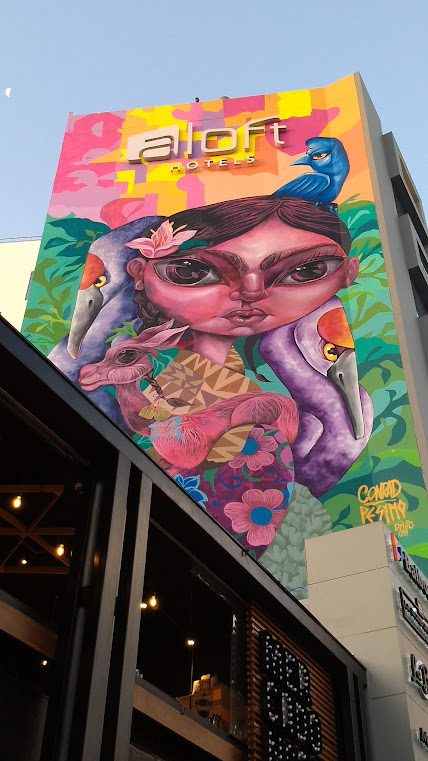 STAY: Aloft Lima Miraflores Hotel The in Lima has it all! The great location in the trendy, happening area of Miraflores puts you close to the boardwalk and Pacific Ocean, tons of restaurants and things to do, and very accessible via taxi to the Lima Cathedral, Plaza Mayor and other places of interest in the city. Plus, the Aloft Lima Miraflores is a very cool place to stay — a colorful mural rises along one exterior side, while the interior greets you with whimsical touches, a hip vibe, stylish yet comfy rooms and services galore.

INFO: VisitPeru.com Check out the website for travel information and helpful planning resources for not only Lima, but other regions of Peru as well. You can also use an app such as TripScout while on a trip!

My Best and Worst Travel Experiences of 2013

Austin City Guide: Where to Eat and Drink Like a Local During SXSW